Beer and the Brain 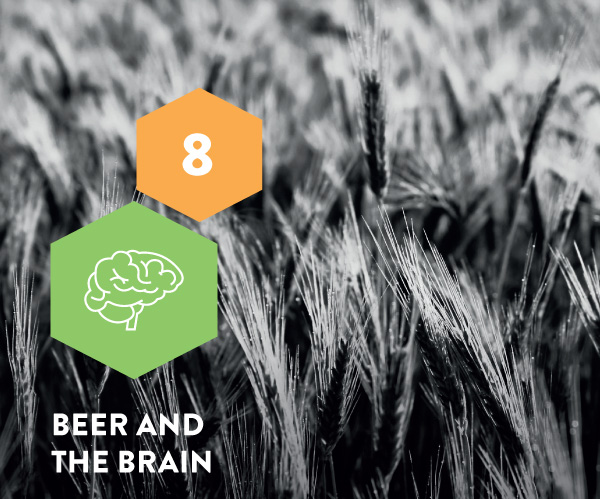 Alcohol consumption and the developing brain

From conception up to an age of approximately 25 years old, the brain is developing. The total brain size at 6 years old is about 90% of adult size, but the brain continues to undergo dynamic structural changes throughout adolescence and well into young adulthood. During this whole period, the brain may be vulnerable to the effects of alcohol.232-234

Foetal stage
Large amounts of alcohol during pregnancy can cause foetal alcohol syndrome (FAS). This is a devastating developmental disorder consisting of structural abnormalities and growth deficits. FAS is associated with a broad spectrum of neurobehavioral abnormalities. 235The effects of lower doses of alcohol on the foetal brain and other organs are unknown, but whether there exists a safe alcohol dose during pregnancy is uncertain and controversial.236

Young adulthood
The brain develops up to 25 years of age. More research is needed to understand the influence of moderate alcohol consumption on the developing brain from legal purchasing age* and how this could affect functioning in daily life. Studies conducted to date have mostly focused on adolescents with alcohol use disorder (AUD) (either alcohol abuse or alcohol dependence). Impairments related to language, attention, learning and memory were found. 237-239Results of these studies are often generalised to the general public, assuming that findings in this at-risk group can be translated to heavy drinkers in general. However, recent population studies in heavy adolescent drinkers (without diagnosis of AUD) have found only small differences in neurocognitive functioning as compared to abstainers. 240,241These preliminary findings need to be confirmed in large prospective studies. Drinking in moderation during adulthood has been associated with improved quality of life (see Chapter 9), and similar benefits have been found in adolescents. The limited literature suggests that moderate alcohol consumption is related to stress response reduction, mood enhancement, improved cognitive performance, reduced clinical symptoms primarily of depression, and improved physical functioning.242

Later in life, the brain undergoes changes that influence its functioning. The normal ageing process of the brain results in cognitive decline. Mild cognitive impairment (MCI) is an ageing process of the brain that is beyond what is expected based on age and educational level. People having MCI may retain the ability to be independent, but of those with MCI, 10–15% develop dementia for reasons that still remain unknown. Dementia is a brain disease causing damage and breakdown of nerve brain cells or the connecting tissue between nerves. This results in cognitive deficits that interfere with independence. There is no agreement on the prevalence rates of MCI in Europe. According to the scientific literature, MCI prevalence rates vary from 3% to 42%, depending on the age and definition of cognitive impairment used. 243 243 In 2015, an estimated 10.5 million of the about 177 million people aged 60 years and over in Europe were suffering from dementia. 244 Several population studies have looked at the association between alcohol consumption and cognitive decline, MCI and dementia.

Alcohol consumption and mild cognitive impairment
A meta-analysis indicated that moderate alcohol consumption (not specified in grams per day) is associated with a 22% lower relative risk for MCI,246 and results of a recent cohort study are in line with these findings. Compared with abstainers, alcohol consumption of 150–270 g per week is associated with 40% less cognitive impairment 5.7 years later. Although this protective effect was not significant after adjustment for potential confounders, as a group, regular drinkers had lower adjusted odds of cognitive impairment than abstainers or irregular drinkers.248 Patients with MCI who consumed 1.0–14.9 g of alcohol per day had a 85% reduction in the rate of progression towards dementia in comparison to patients with MCI who never consumed alcohol.249 Similar findings were observed in another follow-up study among those with MCI. Patients who consumed more than 20 g of alcohol per day had the highest rate of MCI progression to dementia, those who consumed less alcohol per day had the lowest, while abstainers had an intermediate rate.250 The mechanism by which alcohol intake protects against the progression of MCI to dementia is unknown, though alcohol consumption might have an effect on the cerebral vasculature or is related to favourable social and lifestyle factors (see Section 8.3).249

The mechanism by which moderate alcohol intake could protect against the progression of a normal aging brain to mild cognitive impairment and dementia is, at present, unknown. Mechanisms by which alcohol consumption affects cardiovascular disease risk, increased HDL cholesterol, decreased platelet aggregation, improved glucose tolerance and reduction of inflammation markers (see Chapter 5), might also have an effect on the cerebral vasculature. This also supports the observation that moderate alcohol intake might protect against ischemic stroke (see Chapter 5). It is also possible that moderate alcohol consumption may be an indicator of a complex set of favourable social and lifestyle factors that protect against cognitive impairment. to non-drinkers.249,252

Parkinson’s disease nerve cells die mostly in the part of the brain called the substantia nigra, which dramatically decreases the amount of the hormone dopamine. A person becomes less and less able to regulate body movements and other normal body functions, as well as emotions. In Europe, 1–2 in every 1000 people have Parkinson’s disease, 253though the exact cause of Parkinson’s disease is not yet clear.254

The acute effects of alcohol on the brain

Alcohol reaches the brain approximately 5–10 minutes after consumption.259 Depending on the blood alcohol concentration (BAC) there are different effects on the brain (see Table 6). BAC depends on a number of factors including the rate of consumption, gender and body weight. For example, consumption of 10 g of alcohol by a 80 kg man results in a peak BAC of 0.02%, whereas 10 g of alcohol by a 65 kg woman results in a peak BAC of 0.03% (see Chapter 10). At these BACs, the frontal lobe sedates, inducing relaxation, impaired judgement, and increased heart rate.

When BACs rise, the speech and vision centres in the midbrain are affected. At higher concentrations of alcohol in the blood, the cells in the cerebellum responsible for coordination of voluntary muscles are affected, including those used in speech, eye-hand coordination and limb movements. At very high BACs, the conscious brain is completely subdued and the person passes out. Even higher doses of alcohol anesthetize the deepest brain centres that control breathing and heartbeat, causing death.82

Remember: It is not advisable to drink alcohol under the legal purchasing age

During adolescence, the brain goes through a number of changes. Brain networks sensitive to social and emotional stimuli and reward processing mature quickly, while cognitive control functions lag behind. Furthermore, adolescence is a period in which individuals need to learn from experience. Both these changes result in adolescents tending to engage in experimental behaviour, including alcohol consumption. Research indicates that if adolescents drink alcohol, they mainly do so in moderation. However, they have a higher risk of binge drinking, which can be explained by findings from animal studies. It seems that the adolescent brain is less sensitive to aversive sedative effects and more sensitive to the rewarding, stimulant effects of alcohol as compared to adults. Such a decreased sensitivity in combination with the rewarding effects of alcohol may lead to loss of control when drinking. The negative consequences of alcohol abuse are ignored, and this leads to binge drinking. Binge drinking may negatively affect social functioning in the short term, and may negatively affect mental and physical health in the long term. In addition, it increases the risk of alcohol dependence in adulthood.242