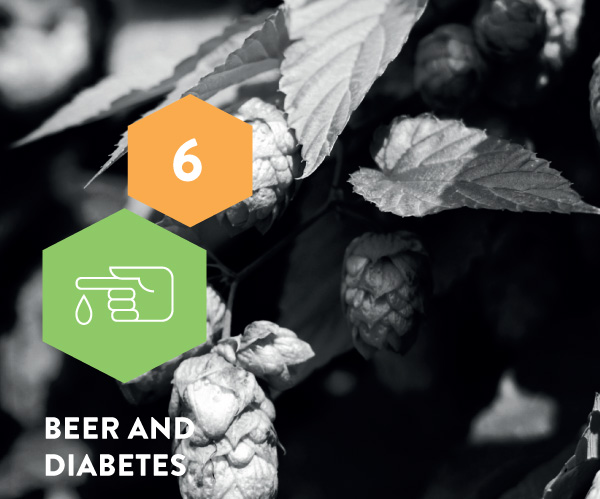 As beer contains alcohol, it can have an effect on diabetes. There is considerable scientific evidence that alcohol consumption of up to 24 g per day can lower the relative risk of type 2 diabetes by up to 30%. In people with diabetes, moderate alcohol consumption may improve glycaemic control and convey cardiovascular risk reduction and mortality benefits. These effects apply to all alcoholic beverages.

There are about 60 million people with diabetes in Europe (type 1 and type 2, see box on Background of diabetes), and the prevalence of diabetes is increasing, already reaching 10–12% in some countries. 145 In addition, there is a large suspected number of undiagnosed diabetics. In Europe, about one in three people with diabetes do not know they have it. 146Of those with diabetes, 50% die of cardiovascular disease (primarily coronary heart disease and stroke), and 10–20% die of kidney failure.145,147,148

Population studies show a J-shaped relationship between alcohol consumption and risk for type 2 diabetes (see Figure 7). Compared to those who do not consume alcoholic beverages, consumption of up to 24 g of alcohol per day is associated with a 30% lower relative risk for type 2 diabetes on average. There appears to be a marked gender difference, the effect being more pronounced among women than men. The putative protective effect was found to be up to 25% for men and up to 45% for women. 149-151Another meta-analysis found the positive effect to be confined to women and non-Asian populations only.152 Higher alcohol consumption results in a comparable or higher risk for type 2 diabetes compared to non-consumers.149-152 The difference in risk reduction between men and women could be explained in part by body fat distribution.151, alcohol metabolism153 or drinking patterns.154

Lifestyle effect
The association between moderate alcohol consumption and type 2 diabetes is not likely to be explained by a healthier lifestyle. In subjects already at lower risk of developing type 2 diabetes based on a favourable lifestyle (low body weight, high physical activity level, non-smoking and healthy diet), alcohol consumption of 5–14.9 g per day for women and 5–29.9 g per day for men is associated with an additional 44% lower relative risk of developing type 2 diabetes.156

Transient and reversible effect
The effect of alcohol on diabetes risk may be transient and reversible based on data of a four year follow-up epidemiological study. A decrease in alcohol consumption from 5–30 g per day to 0–5 g per day is accompanied by a modest increase in relative risk of type 2 diabetes. On the other hand, an increase of alcohol consumption of 7.5 g per day in those not drinking or those drinking less than 15 g per day lowers the type 2 diabetes relative risk by 10–20%.155

Multiple biological mechanisms that may explain how alcohol consumption affects type 2 diabetes risk have been explored in intervention studies.

Glycaemic status control
Lower levels of hemoglobin A1c (HbA1c) have been observed in those consuming less than 40 g of alcohol per day as compared to abstainers. 162The concentration of HbA1c in the blood reflects average glucose levels over the preceding 8–12 weeks and is used as a measure of glycaemic status. A low level of HbA1c indicates a better glucose regulation. The underlying mechanism of glycaemic control by alcohol is not clearly understood, but alcohol may decrease HbA1c by suppressing the acute rise in blood glucose after a meal and increasing the early insulin response.162

Alcohol consumption in people having diabetes

For people who have diabetes, moderate alcohol consumption may affect blood glucose level and complications related to diabetes.

Hypoglycaemic effect of alcohol
Alcohol has acute effects on carbohydrate metabolism since it inhibits the production of glucose by the liver. When alcoholic beverages are consumed without food, this may result in hypoglycaemia in subjects with diabetes using insulin or insulin stimulating medication (with the exception of GLP-1 analogues). 169Low blood glucose level after alcohol consumption is specifically a risk when glycogen stores are depleted, which could be the case for people on a low carbohydrate diet or those who are fasting. Therefore, consuming alcohol with a meal is the preferred option for people with diabetes and using insulin or insulin stimulating medication.170

Risk of coronary heart disease
Individuals with diabetes are at higher risk of coronary heart disease (CHD). 171Consumption of 18 g or more alcohol per day compared with non-drinking lowers the risk of developing CHD in these individuals by 40% and the relative risk of dying of CHD by 66%. 172In a follow-up study, a CHD relative risk reduction of 61% was observed with the consumption of 100–200 g of alcohol per week.173

Risk of neuropathy, retinopathy and nephropathy
Apart from the macrovascular (large blood vessel) complications resulting in CHD, people having diabetes also have an increased risk of developing microvascular (small blood vessel) complications such as neuropathy (nerve damage), retinopathy (damage to the retina of the eye) and nephropathy (damage/disease of the kidney). Consumption of 30–70 g of alcohol per week may reduce the relative risk of these complications by 40% or more.174

What is type 1 diabetes?

Type 1 diabetes accounts for around 10% of all diabetes worldwide. It is characterised by deficient insulin production due to the autoimmune destruction of pancreatic cells. Insulin is a hormone produced by the pancreas that regulates the absorption of glucose from the blood. Type 1 diabetes is not preventable with current knowledge, and treatment requires the daily administration of insulin.

What is type 2 diabetes?

Type 2 diabetes is a disease in which the body first becomes insensitive to insulin (see Figure 8). Then, as a result of insulin insensitivity, insulin production is increased, which may lead to impaired insulin secretion by the pancreas. This leads to high blood glucose levels (hyperglycaemia), which can result in serious damage to nerves and blood vessels over time.145

What are the risk factors for type 2 diabetes?

Lifestyle related factors that increase the risk of type 2 diabetes are mainly excess adiposity147 and insufficient physical activity, the latter may decrease insulin sensitivity and increase adiposity175. Other risk factors are a high intake of calories from refined carbohydrates and saturated fats, a low intake of fruit and vegetables, high intake of salt, and smoking.147,176 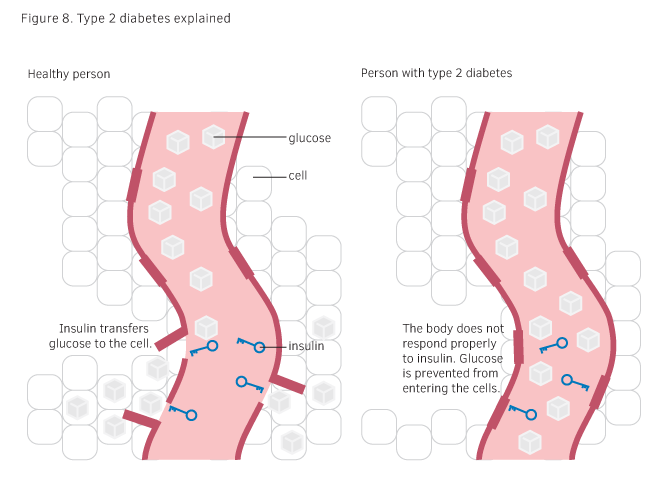 The glycaemic response (GR) is the blood glucose response after eating food or a meal that contains carbohydrate.

The glycaemic index (GI) is the GR after eating a portion of food containing 50 g (or in some cases 25 g) of available carbohydrate measured within a period of two hours. The GI is expressed as a percentage of the GR after 50 g (or 25 g) of the reference carbohydrate (i.e. either a glucose solution or white wheat bread, defined respectively as the glucose scale or the bread scale). Foods having carbohydrates that are digested, absorbed and metabolised quickly are considered high GI foods (GI ≥ 70) whereas those that are digested, absorbed and metabolised slowly are considered low GI foods (GI ≤ 55).

The glycaemic load (GL) expresses the total available carbohydrate content in a given amount of food, multiplied by its GI: (GI × carbohydrate (g))/100. Foods with a GL ≤ 10 are been classified as low GL, and those with a value ≥ 20 as high GL.

In population studies, diets with a high GI or GL have been associated with an increased risk of developing type 2 diabetes and coronary heart disease, whereas a low dietary GI or GL reduces the risk. The biological mechanism behind this protective effect is that low GI or GL diets may improve insulin sensitivity, lipid profile and inflammatory markers including C-reactive protein.177

Beer is classified as a high GI food, with the GI of lager beer around 100178,179, comparable with the GI of potatoes or breakfast cereals. 180However, the GL of beer is only 7.5 because of the low carbohydrate content (7.5 g carbohydrates per 250 ml*). In comparison with other products, a glass of a regular soft drink has a GI of 63 and a GL of 16, and a boiled potato of 150 g has a GI of 96 and a GL of 24. 180Although diets high in GI or GL have been associated with an increased risk of diabetes, 181alcohol consumption up to 24 g per day is related to a lower diabetes risk. 149-151This contradiction might be explained because when beer is consumed with or before a carbohydrate meal, beer tends to reduce the blood glucose peak after the meal. The biological mechanism behind this is likely to be alcohol’s ability to acutely inhibit glucose production in the liver and so counteracts the blood glucose response as a result of glucose absorption from the food/meal by the gut, and thereby reducing the overall GR (blood glucose peak). This results in more stable blood glucose levels after the food/meal, and that might consequently reduce the risk of type 2 diabetes. 182As alcoholic beverages are often consumed together with a meal, the GR of beer consumed together with a meal might be more important to consider for diabetes risk than the GI of beer itself.

*Based on an average carbohydrate content of 2.5 g per 100 ml. Some beers will be higher or lower.

Remember: Most people with diabetes can safely drink beer, in moderation

The recommendations for alcohol consumption for people with diabetes are the same as for the general population, 183whether they are taking medication or not. However, those using insulin or insulin stimulating medication should be aware of the hypoglycaemic effect of alcohol, but when alcoholic beverages are consumed in moderation with food, only minimal acute effects on plasma glucose concentrations are expected. 170Moderate alcohol consumption may improve glycaemic control and convey cardiovascular risk reduction and mortality benefits in people having diabetes.170,172,173 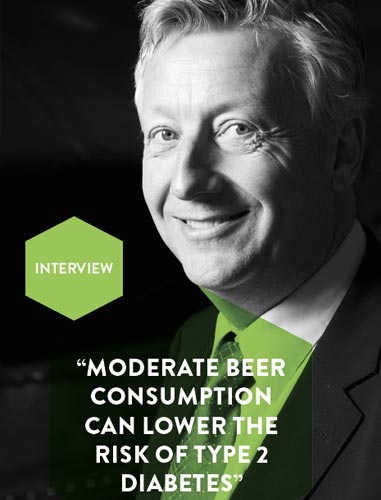 Compared to healthy lifestyle habits that lower the risk of type 2 diabetes, how large is the impact of moderate alcohol consumption?
“Excessive body fat and abdominal fatness, i.e. a fat belly, together with physical inactivity, can explain up to 90% of all new cases of type 2 diabetes, but factors such as smoking, diet and drinking habits make an additional though relatively small contribution. Consumption of 1–2 glasses of alcoholic beverage per day has a small but important protective effect on type 2 diabetes – important because many people including health professionals, believe that alcohol increases the risk.”

If you had unlimited funds, what would you like to research in the area of moderate beer consumption as part of a healthy lifestyle?
“Moderate beer consumption is likely to reduce stress and anxiety, on top of the effect on type 2 diabetes and cardiovascular disease. However, most of the evidence is based on observational studies, and I would like to conduct a randomized controlled trial to get the final proof.” 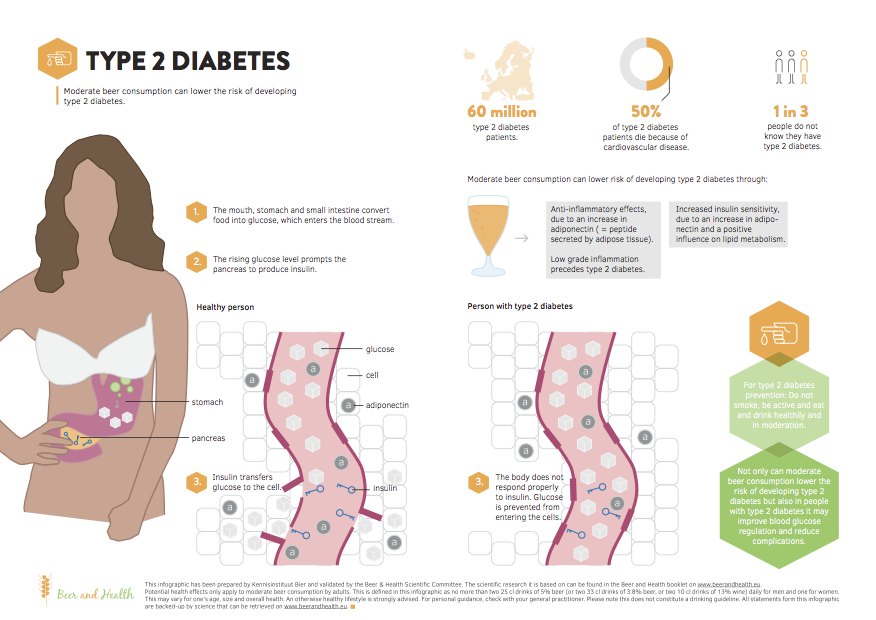