Beer and other Health Effects 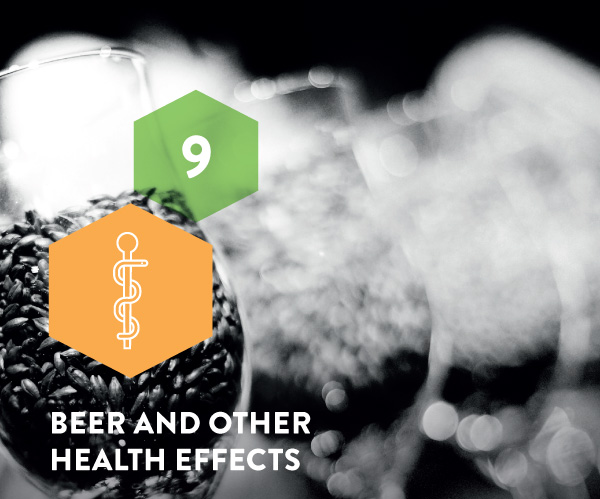 For some diseases such as cancer and cardiovascular disease, the link to beer consumption is already quite clear. Beer can also affect the immune system, bone, joint and kidney health, gallstones, well being and the quality of life. However, more research is needed before strong conclusions can be made on these effects.

Alcohol in small and moderate quantities may have a beneficial effect on the immune system. Some studies reported that moderate alcohol consumption of 10–40 g per day could decrease the risk of the common cold. 167Others saw a decrease in inflammation and a better response to vaccines. 258Besides alcohol, other components in beer such as polyphenols may influence the immune system. 23There is very limited research available and more is needed to determine what effects are caused by alcohol and what are caused by the non-alcoholic components in beer.

Osteoporosis
Osteoporosis is a disease causing brittle bones, prone to fractures. One in three European women aged 50 years and over and one out of five men of the same age, suffer from osteoporotic fractures. Besides gender, low body mass index (<18.5 kg/m2), older age, lack of physical exercise, previous bone fractures, and smoking, all increase the risk of osteoporosis.259

Alcohol may play a role in decreasing the risk of rheumatoid arthritis, but may increase the risk of gout, another condition of the joints.

Moderate alcohol consumption may help to prevent kidney stones and it probably does not harm kidney function.

Kidney stones
As alcohol increases urine output, it could help to prevent kidney stones, hard masses of calcium formed in the kidneys. How many people in Europe have kidney stones is not clear, but it is a common disease that increases in prevalence with obesity, and drinking enough fluids is important in prevention.

Chronic kidney disease
Kidney stones may increase the risk of chronic kidney disease (CKD), 269which is defined by a slower filtration rate in damaged kidneys. The main function of the kidneys is to filter waste products from the blood and convert it into urine. In the European population, 5.1–7.0% is at an early stage of CKD and 4.5–5.3% is in a more advanced stage.270

Gallstones are hard masses in the gallbladder made largely from cholesterol. They are common in Europe, with prevalence ranging from 5.9% in Italy to 21.9% in Norway.272

Well being and quality of life

People enjoy the relaxing effect of drinking beer and other alcoholic beverages, but there is limited research on the effects of moderate alcohol consumption on well being and the quality of life.

Well being
One review concluded that consumption of less than 20 g of alcohol per day may reduce stress and tension, and increases sociability and the feeling of well being. 275In an experimental study on social interaction, drinking 1–2 alcoholic drinks (grams not specified) made people more social, friendly and agreeable during a conversation according to the person they were talking to, but what caused these positive changes in mood and well being was not made clear.276

Quality of life
Multiple studies suggest that alcohol consumption of less than 30 g per day positively influences health-related quality of life. On the other hand, excessive alcohol consumption shows the reverse is true in research with adults more than 50 years old. 277In a population study in the USA, people were asked about their alcohol consumption and how they would rate their health. More moderate drinkers (defined as women consuming 42–98 g and men consuming 42–196 g of alcohol per week) rated their health above average as compared to abstainers and people with a higher alcohol intake.278