Basics on beer and health 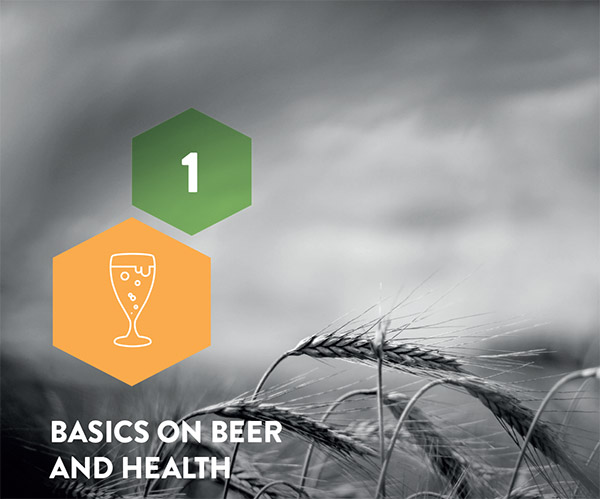 This booklet summarises the relevant scientific literature on moderate beer consumption in relation to health, but there are some aspects you have to take into consideration while reading it.

Beer usually contains alcohol, and alcohol is responsible for some positive health effects provided that it is consumed in moderation. Therefore, some of the chapters in this booklet are about the consumption of alcohol in general, and the effects of alcoholic beverages other than beer are also mentioned. Of all alcoholic beverages, beer is a beverage with a relatively low alcohol percentage (on average 4–5%). Other chapters thus focus on the potential health effects of beer as derived from the natural raw materials from which it is brewed.

Interpretation of scientific research on beer and health

Years of scientific research suggests that the regular consumption of beer, up to two glasses per day for adult men and up to one glass per day for adult women (while avoiding excessive drinking) can have a protective effect on health. However, this statement may not be generalised to the overall population since some individuals may have a family or medical history or a certain lifestyle which counters the general trend. That is why in the text, words like ‘may’ and ‘potential’ are often used. When in doubt, it is recommended that you check with your general practitioner for personal guidance on drinking. A characteristic of scientific research is that the results of new studies can change insights, but only when there is enough evidence advice will change. In this booklet, the current state-of-the-art insights based on the most recent evidence are presented.

How much is moderate?

Recommendations on the safe limits of alcohol consumption vary from one country to another (see Figure 1), and range from a maximum of 8–40 g per day. Also, the amount of alcohol in any one ‘standard’ drink varies considerably depending on the size of the glass and the strength of the beverage, differing across Europe according to historic traditions and customs from 8–20 g per drink. To be specific about the amount of alcohol that is responsible for certain health effects, grams of alcohol are used in this booklet.

Communicating to the public

Individuals often consider alcohol consumption in terms of ‘drinks’ rather than grams of alcohol consumed, but there is no such thing as a ‘standard drink’. The sizes and strengths of drinks vary from country to country, from drink to drink, and from consumer to consumer. To be as objective and informative as possible, this booklet uses the term ‘a drink’ to describe one that contains 10 grams of alcohol. Table 1 shows the size of different drinks containing different levels of alcohol by volume.

Moderate is not always responsible

For some groups and on some occasions, it is better to drink no alcoholic beverages at all. This applies in the following circumstances.

• When under the legal purchasing age*
• During pregnancy or when trying to conceive
• Women who are breastfeeding
• When driving
• When operating machinery
• Before physical activity such as sports
• When taking certain medication
• Patients with past alcoholism, or liver, gastrointestinal or pancreatic disease

Also, people who do not drink alcoholic beverages are not encouraged to start drinking them (even in moderation) for health reasons. Alcohol consumption can in some cases lead to addiction and excessive use which is harmful to health.

The strength of scientific research

In health science, different types of studies are used to analyse and understand the patterns, causes and effects of health and disease conditions in defined populations. Figure 2 shows the strength of conclusions from different studies.

In a population study, for example a cohort study or case control study, a large group of people is followed over a long period of time to try and identify any common (lifestyle) factors that people who get a certain disease may have. However, as scientists cannot control all factors during such studies, some may be overlooked or incorrectly linked to certain disease risks, and so proof of causality cannot be proven with a population study.

A systematic review is a thorough, comprehensive and explicit means of integrating and analysing the existing scientific literature in order to try to identify stronger associations. 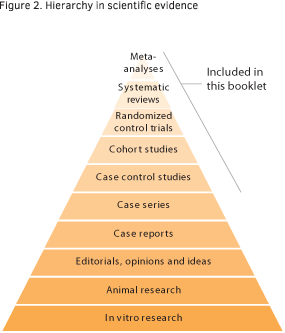 In this booklet you can read about beer consumption lowering or increasing the risk of suffering from certain diseases. It is important to understand that these numbers present relative risks. For example, someone can have a 20% risk of getting a disease, and moderate beer consumption may lower the risk by 10%. This means that the risk is reduced by 2% (10% of 20), i.e. from 20% to 18% when drinking beer in moderation, and not that the risk is reduced to 10%. Equally, when talking about increased risk it is important to know what the existing risk is in order to understand the scale of the issue.

Traditional beer drinking cultures such as Germany have experienced a decrease in beer consumption and an increase in wine consumption. In traditional wine drinking cultures such as France, Italy and Spain, a beer culture has also emerged.2 These shifts in drinking habits are accompanied by changes in drinking patterns. Binge drinking used to occur predominantly in Northern and Eastern Europe, but is now seen, though often nowhere near to the same extent, in younger populations throughout Europe.2,3

Although nowadays beer and wine are consumed in all countries and both excessive and moderate consumers are found in all countries, drinking cultures do still vary from one country to another. So it remains impossible to talk about the European consumer as one homogenous type of drinker.

Drinking alcohol occurs mostly in social settings. Traditionally in Southern Europe, drinking of alcohol was embedded in everyday social events, like during meals. In Northern and Central Europe, people used to consume alcohol frequently when going out. These drinking patterns are becoming more and more intertwined, combining alcohol consumption during meals and drinking in other contexts.4 Special happenings such as birthdays or weddings may also provide occasions to drink alcohol.2,5

Blood alcohol concentration does not increase as quickly when drinking alcohol during a meal as compared to drinking alcohol on an empty stomach (see Chapter 2). A shift from drinking moderate amounts of alcohol during meals to a pattern of drinking intoxicating amounts even occasionally does not benefit health, and would, for example, counter the positive effects of moderate alcohol consumption on cardiovascular health.6

Remember: Saving your drinks only for the weekend is unhealthy 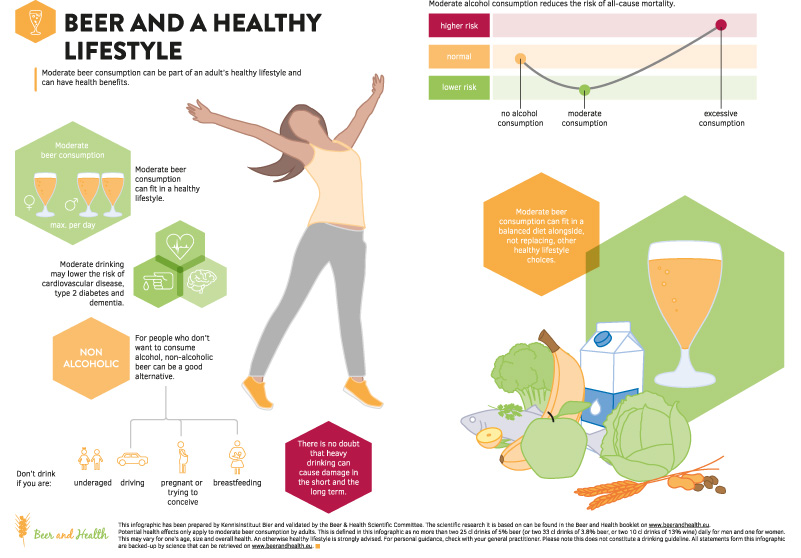