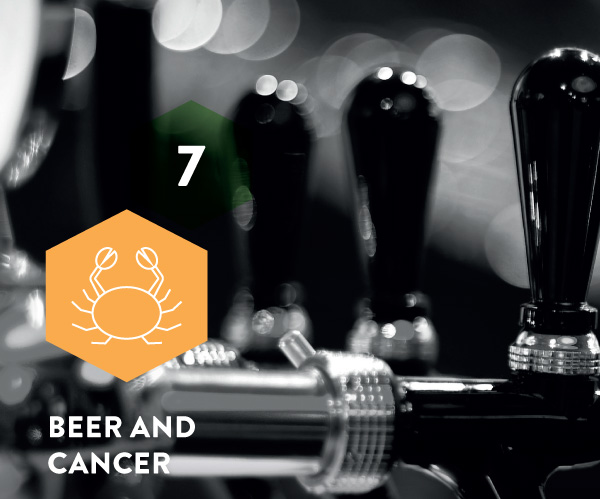 Alcohol can increase the risk of breast, colorectal, head and neck, liver, and oesophageal cancer. A substantial part of the alcohol-related cancer cases in Europe is associated with consumption of more than 24 g per day for men and more than 12 g per day for women. In men, about 3% of alcohol-related cancer cases are associated with alcohol consumption of less than 24 g per day, and 1% for women consuming less than 12 g alcohol per day.

The majority of the cancers worldwide are due to exogenous causes. Only a minor part of all cancers are due to endogenous causes such as genetic prediposition. 187Cigarette smoking is the largest preventable cause of cancer in Europe. Other major risk factors for cancer are an unhealthy diet (low intake of fruit and vegetables, high intake of red and processed meats, high calorie intake), and physical inactivity. Alcohol consumption and environmental issues (exposure to the sun, pollutants, infections, etc.) also contribute to cancer risk. 188A substantial part of the cancer cases attributable to alcohol consumption in Europe is associated with a daily alcohol consumption of more than 24 g for men and more than 12 g for women.189

NA – not applicable
** The lowest and the highest risk (differs between countries within Europe) of getting a specific cancer up to 75 years old. Data derived from globocan.iarc.fr.
*** Lip, oral cavity, pharynx and larynx

Population studies have shown that consumption of alcoholic beverages may increase the risk of developing cancers of the female breast, colorectum, head and neck, liver and oesophagus.190For cancer prevention it is better not to drink alcohol. 188However, many cancer cases in Europe related to alcohol consumption are associated with daily consumption of more than 24 g of alcohol for men and more than 12 g of alcohol for women.189This also partly explains the higher part of the J-shaped curve between alcohol consumption and all cause mortality. With moderate consumption there is a lower risk for all cause mortality (see Chapter 10).

An example of how to interpret the alcohol attributable fraction data in Table 4
The alcohol attributable fraction for breast cancer is 5%. This indicates that of all breast cancer cases in Europe, 5% are associated with alcohol consumption. The incidence of breast cancer in 2012 was 458,337 cases, and so about 23,000 of these are associated with alcohol consumption. In other words, if all women in Europe had abstained from alcohol during their whole life about 23,000 cases of breast cancer could have been prevented in 2012. Other examples are: if all men in Europe did not consume alcohol during their whole life about 41,000 colorectal cancer and 14,000 liver cancer cases could have been prevented in 2012. Keep in mind that most alcohol-related cancer cases are associated with high alcohol consumption.

Breast cancer
Female breast cancer is the most prevalent cancer in Europe. Alcohol consumption is one of the factors increasing breast cancer risk, as well as high body weight, physical inactivity and the use of the birth control pill. Relative breast cancer risk increases by 3–9% (compared to existing risk) for every 10 g of alcohol consumed per day. 191-196The inconsistency of relative risks found across studies might be partially due to differences in the number of subjects with hormone receptor negative and hormone positive tumours. Non-hormonal pathways such as DNA damage are likely to cause receptor negative tumours. Hormone receptor positive tumours contain receptors for the hormones estrogen and/or progesterone. With alcohol consumption, a higher risk for hormone receptor positive tumours has been reported.197-200 The risk effect of alcohol on breast cancer plays a particularly important role in women with a family history of benign mastopathy (diseases of the breast) or other conditions associated with increased breast cancer risk. 194Although there are indications that there is no relationship with body mass index (BMI) or use of hormones, there are still many other aspects that need to be clarified, such as the effects of the age when drinking started, drinking patterns, menopausal status and genetic polymorphisms.201

The possible mechanisms by which alcohol consumption increases the risk of certain cancers are complex and not fully understood.

Acetaldehyde and carcinogenic reactive oxygen species
Acetaldehyde, a toxic metabolite of alcohol, plays a major role in cancer risk.208 At higher consumption levels above 40 g alcohol per day for at least a week, the microsomal ethanol oxidizing system (MEOS) is activated. This alcohol breakdown pathway produces carcinogenic reactive oxygen species (for details of the alcohol metabolism, see Chapter 3). Also bacterial microbiota can metabolise alcohol into acetaldehyde. This is mainly the case with high levels of alcohol in the oral cavity and colorectal areas.209-211

Carcinogenic components other than alcohol
Although alcohol is identified as the most important carcinogen in alcoholic beverages, other compounds such as ethyl carbamate and acetaldehyde may also pose risks. 215In the 1980s, beer received much attention due to the discovery of high levels of nitrosamines, 216identified as potential carcinogenic compounds. 217Brewing processes have been optimised since then, and today, there are only negligible amounts of nitrosamines present in beer.218

For certain types of cancers, some risk reduction is seen with alcohol consumption. However, more research is needed to confirm the findings from these population studies and to find the physiological mechanism explaining the effects. 202The cancers are not the most common cancers. Table 5 provides an overview of the incidence and mortality of these specific cancers, and cumulative risk which indicates the risk of getting that type of cancer up to an age of 75 years. The cumulative risk differs between European countries because of differences in risk factors in each. By knowing this risk, it is possible to put relative risks into perspective (see Box at the start of this chapter). If cumulative risk is very small, even a huge decrease in relative risk due to alcohol consumption may not make much absolute difference. But for a cumulative risk that is quite large already, smaller decreases in relative risk can have a big impact.

* The lowest and the highest risk (differs between countries within Europe) of getting a specific cancer up to age of 75 years old. Data derived from globocan.iarc.fr.

Kidney cancer
The relative risk of kidney cancer decreases (compared to existing risk) by up to 29% with the consumption of up to 50 g of alcohol per day compared to abstainers.202,219,220

Hodgkin’s lymphoma
Hodgkin’s lymphoma is a rare cancer in Europe, as also indicated by the low cumulative risks. Compared with non-drinkers, those consuming alcohol have a 30% lower relative risk (compared to existing risk) for Hodgkin’s lymphoma. An inverse dose-response relationship has also been indicated, but as it was not significant, caution is required in the interpretation of findings.224

It is difficult to estimate how long it takes for such elevated risks to decrease or disappear after someone stops drinking alcoholic beverages. Research is limited and not unequivocal. For mouth and throat cancer it may take more than 35 years to disappear225 and for oesophageal cancer and liver cancer, 16.5 and 23 years, respectively.226,227

Alcohol consumption before and after breast cancer diagnosis

Alcohol consumption before and after breast cancer treatment, appears to have limited effects on survival.

Before diagnosis and survival
Based on a large population study of women with breast cancer, there was some indication that consumption of 42–84 g per week modestly improved breast cancer survival by 15% (relative risk) as compared to non-consumers and those who consume more.228

Cancer is a collective term for more than 100 different diseases which are all characterised by uncontrollable and abnormal cell growth. This growth is caused by a change in the DNA that controls cell division, and tumours form when abnormal cell growth occurs over a long period of time. Malignant tumours can invade other tissues and spread in the blood and lymphatic system causing metastasis (occurrence of tumours in other parts of the body). Benign tumours do not spread, and eventually stop growing. Only malignant tumours are called cancer.230

Relative risk tells you nothing about absolute risk

In this chapter you can read about alcohol consumption increasing or lowering the risk of certain types of cancer. It is important to realise that these figures present relative risks. They tell us how much more or less likely the cancer occurs in a group consuming alcohol compared to others not consuming alcohol. This is different from the overall likelihood of getting cancer in your life, i.e. the absolute lifetime risk. The cumulative risk in Table 4 indicates the absolute risk of getting certain types of cancer up to an age of 75 years old. This risk differs between European countries, depending on particular risk factors in each. By knowing the cumulative risks, it is possible to place the relative risks mentioned in this chapter into perspective, as shown in the example below and the breast cancer example included later. If the cumulative risk is very small, even a huge increase in relative risk due to alcohol consumption may not make much absolute difference. But for a cumulative risk that is quite large already, smaller increases in relative risk can have a large impact.

Example:
The highest absolute lifetime risk for European men up to 75 years old contracting colorectal cancer is 7.4% (see Table 4), which occurs in Slovakia. Consumption of 25 g of alcohol per day increases the (relative) risk by 8% (Section 7.3), equivalent to an increase, due to alcohol consumption in absolute risk from 7.4% to 8.0%, or an increase from 74 to 80 of 1,000 men who develop colorectal cancer.

Remember: Each glass of an alcoholic beverage increases the risk of breast cancer

This is not intended to discourage use of the birth control pill but rather to put into some context the impact of alcohol consumption. 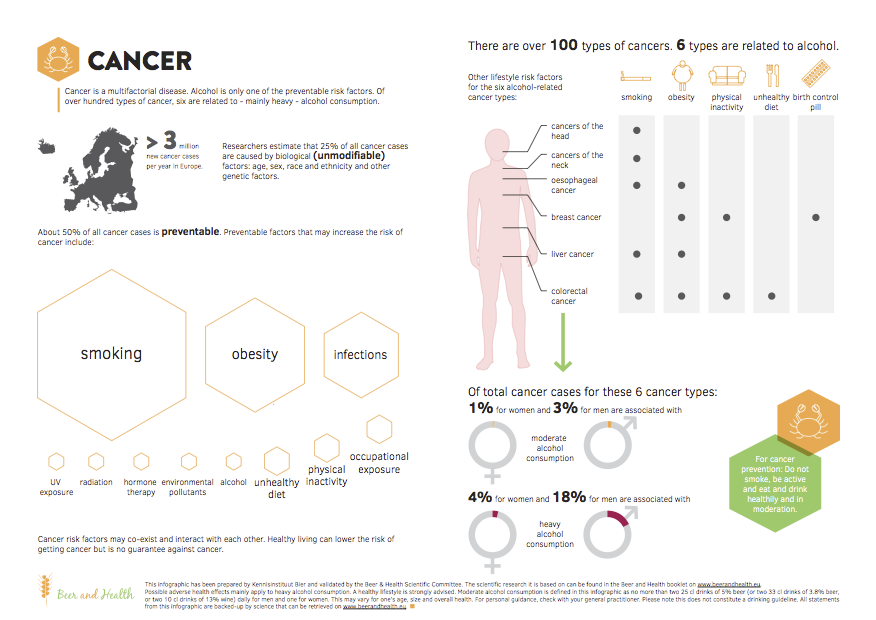