Beer and Health: Making up the Balance 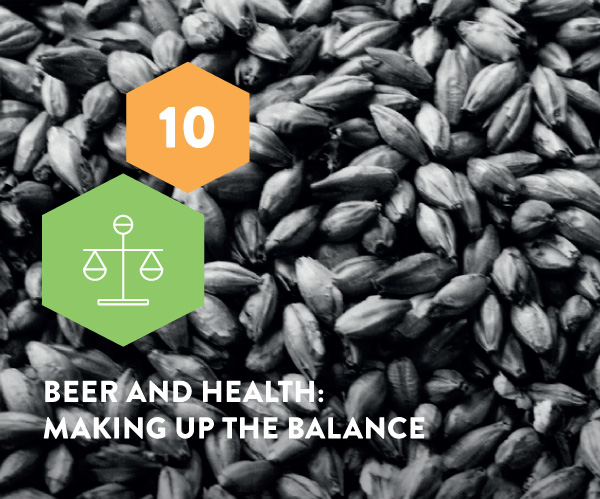 Beer is made from natural ingredients and has relatively low (or zero) alcohol content compared to most other alcoholic beverages. Drinking beer in moderation can have a positive effect on life expectancy, due to the alcohol in it. There is a J-shaped relationship between alcohol consumption and all-cause mortality, with the lowest relative risk (with an approximate 10% decrease) associated with the consumption of around 20 g of alcohol per day for men and 10 g of alcohol per day for women. This effect is the sum of the positive effects on cardiovascular disease risk at moderate intake and the negative effects on certain cancers and accidents with higher consumption. It is unrelated to the type of alcoholic beverage.

Transient and reversible effect
The effect of alcohol on mortality risk may be transient and reversible based on data from a 5-year follow-up population study. Subjects with a stable pattern of light to moderate alcohol consumption (12–72 g alcohol per week) had the lowest all-cause mortality risk. Those individuals starting to drink less or those starting to drink more had a 29% and 32% higher relative risk during follow-up, respectively.291

The J-shaped relationship between alcohol consumption and all-cause mortality is a combined result from many studies. The challenge with these is that residual, unmeasured or confounding results can never be completely excluded. Few epidemiological observations, however, have been scrutinised for bias as thoroughly as the apparent health benefits of moderate alcohol consumption, 292but some uncertainty remains regarding the causal nature of the J-shaped association seen in population studies. Several methodological flaws have been shown in alcohol research that might produce apparent benefits of moderate drinking, as discussed below.

The ‘sick quitters’ hypothesis
Some studies failed to separate lifelong abstainers from ex-drinkers. The non-drinker reference group might therefore include ‘sick quitters’, being those who stop drinking alcoholic beverages because of health problems. 293This may lead to the impression of benefits from moderate drinking, though studies that separated ex-drinkers from lifelong abstainers have refuted this hypothesis.103

The ‘healthy drinker’ hypothesis
Another potential source of confounding evidence is the suggested healthier lifestyle of moderate drinkers, or conversely, non-drinkers may show an adverse risk profile. 294,295Some studies suggest that the J-shaped relationship between alcohol consumption, cardiovascular disease (CVD) and type 2 diabetes is not likely to be explained by a healthy lifestyle. However, even in those with a healthy lifestyle, moderate alcohol consumption is associated with an additionally lower risk of CVD and type 2 diabetes (see Chapters 5 and 6).

In conclusion: Beer and health

All the previous chapters in this booklet show us that beer is a versatile drink with relatively low alcohol percentage, that when drank in moderation, can be part of an adult’s healthy lifestyle. Due to the natural ingredients there are small amounts of B vitamins, minerals, polyphenols and fibre in beer. And because of the alcohol there may be positive effects on life expectancy. For people who don’t want to consume alcohol, non-alcoholic beer can be a good alternative.

Moderate alcohol consumption
There are many adverse effects of heavy alcohol consumption. On the other hand, moderate drinking may have beneficial effects on health, despite an increased relative risk of certain types of cancer. Mainly, there appears to be a lower risk of cardiovascular disease, type 2 diabetes and dementia that may explain the overall lower relative mortality risk (by around 10%) with the consumption of 10–20 g alcohol per day. This is unrelated to the type of alcoholic beverage. The most favourable drinking pattern is regular daily or almost daily drinking, and avoiding harmful binge drinking.298

Although residual confounding results cannot be excluded, it would be unlikely that they would modify the presented scenarios in any substantial way. 285The consistency and temporal sequence in epidemiological studies and the plausible biological explanations in experimental studies all favour the conclusion that moderate alcohol consumption does have beneficial health effects, 299and the benefits of moderate drinking is relevant for public health. 285However, moderate alcohol consumption should always be considered as a supplement to, and not as an alternative to, other healthy lifestyle habits that also lower the risk of chronic diseases, such as coronary heart disease and diabetes.

Remember: A healthy lifestyle is possible with or without drinking beer

Although moderate beer consumption may have health benefits, you do not have to drink beer in moderate amounts for a healthy lifestyle. To ensure a healthy lifestyle, the World Health Organization (WHO) recommends eating lots of fruit and vegetables, reducing fat, sugar and salt intake, and exercising. What is important, is that if you do drink beer, to do so responsibly and in moderation.

Alcohol affects women differently to men mainly because of their different body composition and lower average body weight. Women have a higher percentage of fat in their body and therefore a lower percentage of body fluid. Since alcohol is water-soluble, it is distributed only in body fluid. Women will therefore have higher peak blood alcohol levels than men when they drink the same amount of alcohol (see Table 8). 81Other possible mechanisms to explain gender differences in blood alcohol concentration include differences in the relative metabolism of alcohol, the interaction of alcohol dehydrogenase (ADH) with female sex hormones, lower levels of gastric ADH, and more rapid metabolism in the liver by women.300
The difference in blood alcohol concentration between men and women may explain the reason why the inverse association for life expectancy in women disappears at lower alcohol intake compared to that in men, probably due to an increased relative risk of (breast) cancer.284