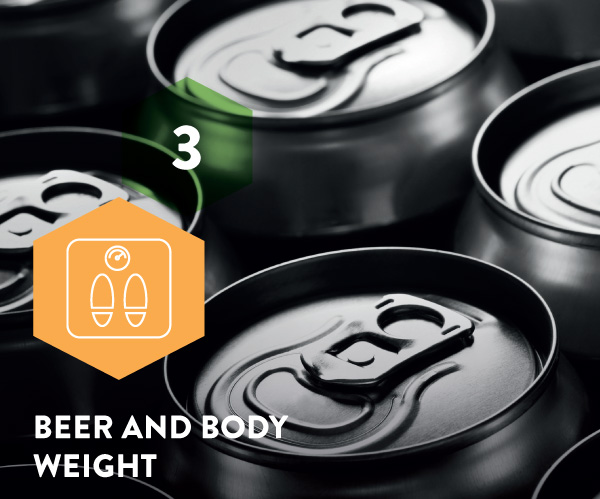 In Europe, being overweight or obese (severely overweight) has reached epidemic proportions.42 Among the 19 EU member states for which data are available, the proportion of adults (een 37.0% and 56.7% for women, and between 51.0% and 69.3% for men.43 Obesity is a major contributor aged 18 years and over) who were considered to be overweight or obese in 2008 varied betw to the global burden of chronic diseases and disabilities.44 Increased adiposity is a key risk factor for type 2 diabetes, dyslipidemia and cardiovascular disease, and is associated with many other conditions including osteoarthritis, certain types of cancer, mental illness, and increased mortality.45-51

Beer, as with almost every other food or drink, contains calories. In beer, about two thirds of the calories comes from the alcohol in it, one third from carbohydrates, and a negligible amount from protein, though these proportions can differ depending on the composition and strength of the beer and how it is brewed.52

Calories from alcohol
Alcohol is the richest energy source in beer and has an energy value of 7 kcal per gram. The breakdown of alcohol in the body takes precedence over the breakdown of other nutrients, as the body cannot store alcohol and treats it as a potentially harmful substance, though small amounts of alcohol with meals may stimulate energy expenditure.53,54

Effects of alcohol on appetite, body weight and obesity

If you eat more calories than you burn, you gain weight. Energy from alcoholic beverages is additive to that from other dietary sources. However, data from population studies suggest that moderate alcohol consumption may protect against obesity, particularly in women.56 Several studies investigated the influence of alcohol consumption on appetite, body weight and obesity.

Appetite
A brief review of literature clearly shows that energy consumed as alcohol is additive to that from other dietary sources, leading to short term passive overconsumption of energy. Alcohol consumed before or with meals tends to increase food intake, probably through enhancing the short term rewarding effects of food,56 and possibly because alcohol increases the rewarding value of food.57

Body weight and obesity
Overall, it appears that light to moderate alcohol intake is less likely to be a risk factor for obesity than heavy drinking and binge drinking, which have been more consistently linked to adiposity.54 A systematic review shows that weight gain is seen with high levels of alcohol consumption. For moderate consumption there is a difference between beverages. Wine seems to protect against weight gain whilst spirits tend to promote weight gain.58 But with beer, there is not enough scientific evidence, especially for women,41 though based on a systematic review it seems that consumption of up to 500 ml per day for men does not contribute to weight gain.

Other factors that influence the effect of alcohol on body weight

The relationship between body weight and alcohol consumption is complex. Not only are the amount and type of alcohol consumed important, but also drinking patterns, gender, type of beverage and lifestyles may play a role.

Drinking patterns
Drinking patterns may be important in how alcohol consumption influences body weight. A population study shows that among men who consumed moderate amounts (<30 g) or intermediate amounts of alcohol (30–100 g) per week, the ones who drank daily had lower body mass index (BMI) and waist circumference compared to those who drank on 1–2 days or 3–6 days per week. The results were similar for beer and wine consumption,59 and earlier population studies showed similar results. It seems that those who consume the greatest quantity of alcohol and the least frequently (binge drinking) were the most overweight. But frequent light or moderate alcohol consumption is not associated with weight gain.60-62

Gender
Middle aged women who drink moderately might even benefit from lower relative risk of weight gain. A population study found that post-menopausal women of normal weight who consume alcoholic beverages moderately (median intake of 19.4 g per day) have a reduced relative risk of becoming overweight (35%) or obese (88%),63 and these results corroborate those of previously published findings.64-70

Type of beverage and lifestyle
Although some studies suggest that beer may promote obesity more than wine, other studies find similar associations with both.41 Experimental studies suggest that wine stimulates food intake more than beer,71and people who prefer beer may differ from non-drinkers or wine consumers with regard to multiple lifestyle factors related to obesity. Beer drinkers appear to have poorer dietary habits than wine drinkers72-74 and beer drinkers are more often smokers.72,75,76 Physical activity may also be a potential confounding factor, and it is difficult to appropriately adjust for all these factors.41 Individuals who frequently drink moderate amounts of alcohol may enjoy a healthier lifestyle in general that may protect them from weight gain. Overall, obesity is a multi-factorial condition and it is difficult to truly assess the independent influence of alcohol intake on obesity risk.54

Metabolic syndrome (MetS) is a clustering of risk factors, including central obesity (high waist circumference), insulin resistance, high blood triglycerides, low high density lipoprotein (HDL) cholesterol, and hypertension, that together result in a fivefold increased risk of type 2 diabetes and a threefold increased risk of cardiovascular disease. Metabolic syndrome might also increase the risk of cancer.77 One in six Europeans, and up to one in three in some European countries, suffers from MetS.78

Alcohol is mainly absorbed via the small intestine and is broken down in the liver. Only 5% of alcohol consumed leaves the body directly via excretion, respiration and perspiration, in urine, breath and sweat. The enzymes alcohol-dehydrogenase (ADH) and aldehyde-dehydrogenase (ALDH) in the liver break down about 7 g of alcohol per hour.81 ADH oxidizes alcohol into acetaldehyde, a carcinogenic compound involved in increased cancer risk. Acetaldehyde is able to bind to and cause mutations in DNA, increasing the risk of uncontrollable cell division. ALDH turns acetaldehyde in the non-toxic compound acetate, and is converted into carbon dioxide (CO2) or Acetyl CoA, a substrate for energy production in the body (see Figure 3).82

When consuming more than 40 g of alcohol per day for at least a week, another mechanism is also activated to break down alcohol, the microsomal ethanol oxidizing system (MEOS). The protein CYP2E1 involved in this system is associated with the activation of carcinogenic reactive oxygen.83

Effect of alcohol on fat oxidation

The human body has no storage capacity for alcohol and aims to eliminate alcohol as soon as it enters the system. When alcohol is consumed, oxidation begins immediately while oxidation of other macronutrients is suppressed. Therefore, alcohol intake decreases fat oxidation during the time that ingested alcohol is being metabolized.84,85

Calories in drinks and snacks

On average, men require some 2,500 kilocalories (kcal) a day, while women require 2,000 kcal. If a person consumes more calories than necessary and fails to exercise enough, then weight gain will result. Food and drinks both provide calories (see Table 3).

* Servings vary across Europe
** Rounded to 5 kcal
Derived from the Food composition data of 16 European countries via www.EuroFIR.org

Remember: Beer is not always the only cause of a ‘beer belly’

There is a widespread belief that drinking beer causes a fat stomach, a phenomenon popularly referred to as a ‘beer belly’. However, there is insufficient scientific evidence to confirm that consuming beer at moderate levels (<500 ml per day) is really responsible for a large waist, although drinking beer at higher levels may be positively associated with getting a bigger belly.41If it is not the beer, then where does the ‘beer belly’ phenomenon come from? It might be at least in part associated with the eating habits and lifestyle of the beer consumer. People who mainly drink beer seem to also eat less healthily than people who prefer wine or who don’t drink alcoholic beverages at all. These differences are largely explained by other socio-demographic and lifestyle factors, particularly smoking and a lack of exercise. After adjustment for these factors, the diet of beer and wine drinkers does not seem to differ that much. Thus, it appears most likely that the lifestyle and demographic factors of beer consumers play a more significant role in the formation of ‘beer bellies’ than the actual consumption of beer per se.86 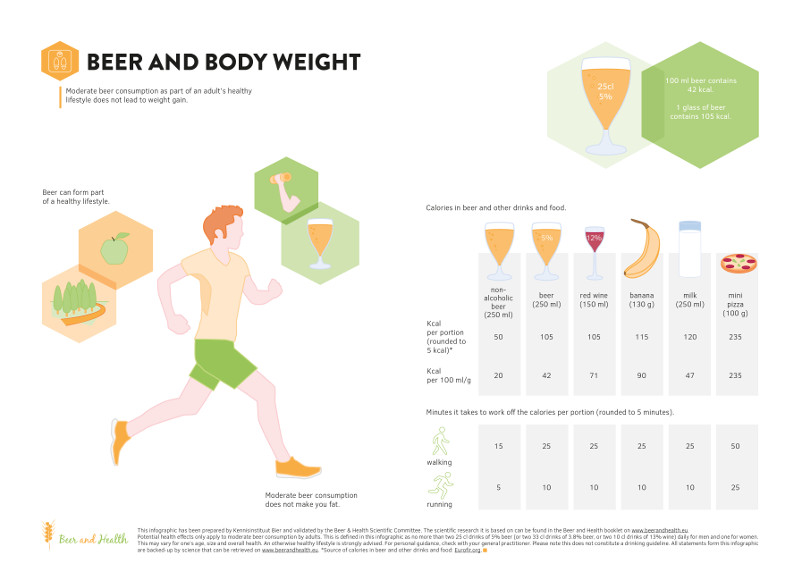