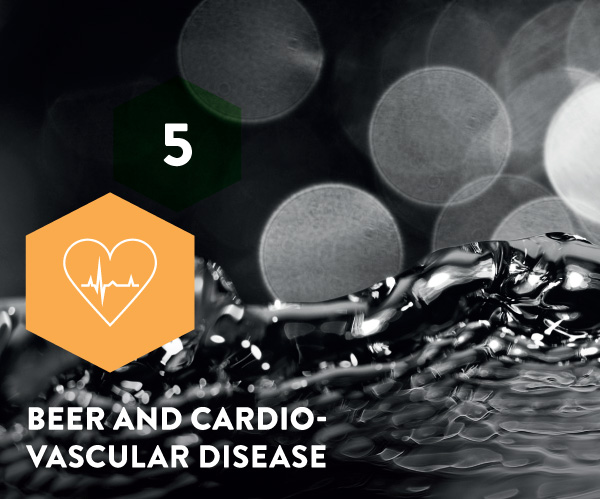 Beer in moderate amounts can be good for heart and blood vessels mainly because of the alcohol in it. There is strong scientific evidence that consumption of 15–30 g of alcohol per day is associated with a 25% lower relative risk of cardiovascular disease mortality compared to abstainers. This is unrelated to the type of beverage.

Cardiovascular disease (CVD) is one the most important cause of death in Europe. Despite a major decline over the last 30 years, approximately four million people died from CVD in 2014, equivalent to 46% of total mortality in Europe. Coronary heart disease (CHD) such as myocardial infarction (heart attack) accounts for almost half, and stroke (brain attack) about a quarter of all cases of CVD.102

There is a J-shaped relationship between alcohol consumption and CVD mortality risk. The lowest risk of CVD mortality is seen with alcohol consumption of 15–30 g per day (25% less relative risk), but is still low at intakes of up to 60 g per day compared to non-drinkers.103 It seems there are no differences in the beneficial effects of alcoholic beverages. This reduction in risk is comparable to preventive measures such as weight control, exercise, and the use of acetylsalicylic acid (aspirin).104,105

Lifestyle effect
A healthy lifestyle (optimal weight, healthy diet, physically active and non-smoking) lowers the risk of myocardial infarction. However, even in men with a healthy lifestyle, those consuming 5–30 g of alcohol per day have a lower relative risk than those that do not drink any alcohol (see Figure 6). The finding of this population study indicates that the cardiovascular protective effect of moderate alcohol consumption adds to the beneficial effects of a healthy lifestyle.107

Alcohol consumption and hypertension
Consumption of up to 20 g of alcohol per day modestly lowers the risk of hypertension in women compared to abstainers, whereas higher alcohol consumption significantly increases the hypertension risk. Among men, the relationship is not J-shaped, there is no relative risk reduction with an alcohol intake of <30 g per day, and above 30 g per day the relative risk of hypertension increases. The mechanism by which alcohol affects blood pressure is not clear. However, at least part of the reduction of blood pressure may be related to an increased synthesis of nitric oxide by the arterial endothelium. There may also be an indirect mechanism whereby alcohol alters hormone levels that in turn affect blood pressure. Differences in the pattern of drinking, beverage choices and smoking habits may also contribute to observed variations in individual and gender-related responses.112

Alcohol consumption and cardiomyopathy
Cardiomyopathy is a heart muscle disease. It can have different causes, but one of them is poisoning of the myocardium (heart muscle) due to chronic alcohol abuse. An observational study showed that people consuming around 240 g of alcohol per day for an average of 16 years developed cardiomyopathy.113 Therefore it is unlikely that alcoholic cardiomyopathy could result from moderate drinking.

Multiple mechanisms by which alcohol consumption affects CVD risk have been identified by intervention studies. These mechanisms support a causal relationship and may explain almost all of the association.8

Increase in HDL cholesterol and its key functions
Consumption of 30 g of alcohol per day increases high density lipoprotein (HDL) cholesterol concentration by about 8%.116 A key function of HDL is to promote cholesterol efflux, being the transport of cholesterol from the periphery to the liver for excretion,117and alcohol consumption increases cholesterol efflux.118,119 In addition, paraoxonase activity, another function of HDL, is increased. Paraoxonase is an enzyme entirely complexed to HDL and that may protect against atherosclerosis by protecting LDL cholesterol from oxidation.120 The increase in HDL and its functions may explain about half of the risk reduction for CVD from moderate alcohol consumption.116

Decrease in fibrinogen
Consumption of about 30 g of alcohol per day can reduce circulating levels of fibrinogen.121 This protein is the precursor of fibrin, a cofactor for platelet aggregation. By decreasing fibrinogen levels, blood clots are less likely to form and as a result, this might decrease the risk of an infarction.

Reduction of inflammation markers
Alcohol consumption of about 30 g per day has been shown to decrease the plasma concentration of C-reactive protein (CRP) by 35%.122,123 CRP is the most commonly studied inflammation marker, active in acute inflammation, but low circulating levels of CRP are not uncommon in people with CVD. CRP may negatively affect the stability of plaques. Other inflammatory markers such as interleukine-6, vascular cell adhesion molecule-1 and intercellular adhesion molecule-1 follow the same trend as with CRP.124

Some scientists suggest that the risk reduction of CHD in low to moderate drinkers depends on genetic variation. People with alcohol dehydrogenase polymorphism (ADH1C) resulting in the slow metabolism of alcohol, may have more CHD benefits,128 though this finding is not supported by others.129 Individuals with yet another genetic variation, the ADH1B polymorphism, were reported to benefit more from drinking less. With low to no alcohol intake, they had a more favourable CVD risk factor profile and fewer CVD events.130 However, this allele is very uncommon. Also, people with this polymorphism are unusually sensitive to alcohol, making them more likely to be abstainers than heavy drinkers, and as a result are not representative.131 In conclusion, the evidence for a genetic role in the health effects of moderate alcohol consumption is still sparse and inconsistent. In addition, there is the question of whether generalised statements about the effects of alcohol on diseases can be made based on results from the analysis of a single nucleotide polymorphism of a gene.132

What is cardiovascular disease?

Cardiovascular disease (CVD) is a collective term for diseases of the heart and blood vessels. It is mainly caused by atherosclerosis. During this process, arterial walls harden and become narrow due to the effects of atherosclerotic plaques (see Figure 5). Most of these plaques contain oxidized low density lipoprotein (LDL cholesterol), and plaques can manifest in all arteries. Atherosclerosis is a degenerative disease of the arteries, due mainly to aging, but an unhealthy lifestyle can speed it up its development. A stable plaque stiffens the arterial wall and can cause ischemia (shortage of oxygen), but it usually never fully closes an artery. Plaques may become unstable because of inflammation, and an unstable plaque may rupture as it increases in size because of inflammatory reactions. Platelet aggregation can later lead to the formation of a blood clot causing a local blockage. When this occurs in the coronary arteries and stops oxygen supply to the heart muscle it causes a myocardial infarction. Also, the clot may detach and block arteries causing infarction in a different location such as the brain.133,134

What are the risk factors for cardiovascular disease?

There are multiple factors that can influence the risk of CVD. Lifestyle factors such as a low physical activity level, unhealthy diet, smoking and obesity can speed up the development of atherosclerosis. Some diseases can also increase the risk of CVD. In diabetes mellitus for example, fat and glucose metabolism is disrupted, causing unhealthy lipid and glucose levels in the blood and making such diabetics more susceptible to CVD.135 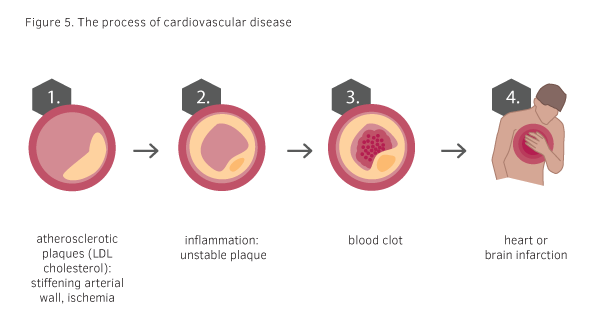 Remember: One to two drinks of beer per day can lower the risk of cardiovascular disease

Despite what scientist at first thought, alcohol is a major factor with respect to lower cardiovascular disease (CVD) risk.103 The famous French Paradox study in 1992 found that although French people consume relatively high amounts of saturated fats, they do not suffer as much as expected from CVD. The scientists concluded that this could be due to consumption of red wine.136 Although phenolic compounds in wine and in beer may play a role in reducing the risk of CVD33,124,137-140 the largest part of the protective effect of these beverages is still due to the alcohol within them.103

Most scientific studies focus on the effect of alcohol on the cardiovascular health of people aged 50 years or older. The reason for this is that young adults have a lower risk of CVD than older people,141 which makes it easier to find significant effects of alcohol consumption in older age. However atherosclerosis is a long-term process that already starts when people are young. A few studies have found decreased incidence of coronary heart disease, decreased arterial stiffness and lower fibrinogen concentration in the 25–50 age groups with the consumption of 0.5–30 g of alcohol per day as compared to abstainers.142-144 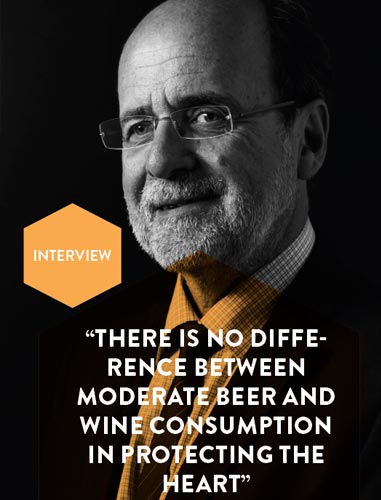 What is known about specific beer and heart health?
“Some research suggests that regular and moderate consumption of beer and wine seems to provide greater cardiovascular protection than spirits because of the polyphenols in these beverages. However, many more studies show that moderate alcohol consumption in general, irrespective of the type of beverage, reduces cardiovascular morbidity and mortality. So the largest part of the protective effects of beer is due to the alcohol content. Some minor components such as the polyphenols xanthohumol and iso-xanthohumol might contribute to health but play a much smaller role.”

The Mediterranean diet is often associated with wine, but can the wine be replaced by beer?
“The traditional Mediterranean diet includes frequent drinking of moderate doses of especially red wine with meals. But even in ancient times this could also be beer. Thus, some experts have pointed out that beer should be included in the Mediterranean diet pyramid, together with red wine and cider. Even nowadays, several Mediterranean consumers replace wine by beer with the meals, especially in summer. For the protective effect on cardiovascular disease, it makes no difference if you drink wine or beer in this diet.”

If you had unlimited funds, what would you like to research in the area of moderate beer consumption as part of a healthy lifestyle?
“Although observational studies are already showing strong suggestions, I would like to demonstrate with the highest level of scientific evidence that moderate beer consumption is useful in protecting against cardiovascular events and type 2 diabetes. To do that you need a large group of people from different countries, who consume controlled meals for a long time, with or without beer. The results from this trial would further help the scientific, medical and public health communities in their recommendations to consumers regarding the effects of moderate beer consumption.” 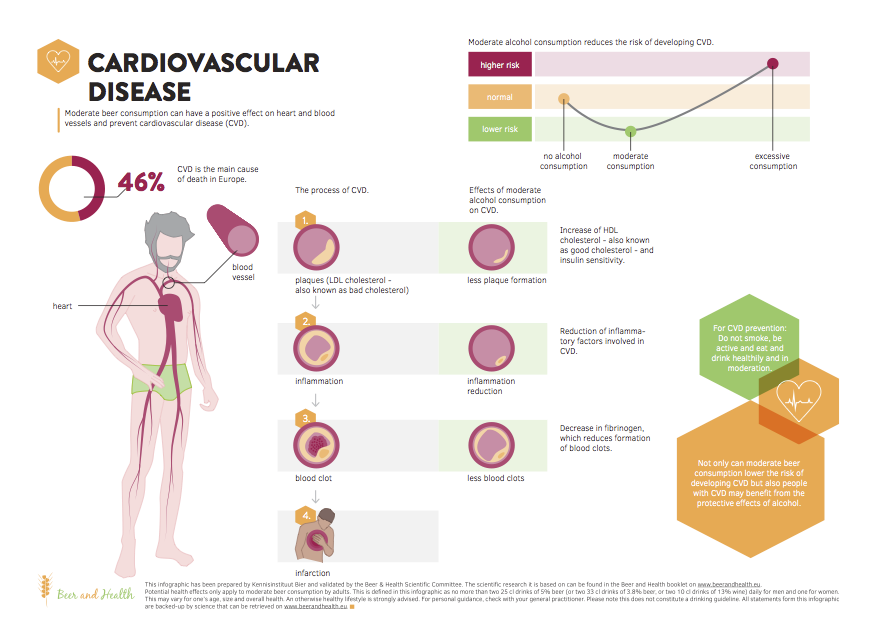