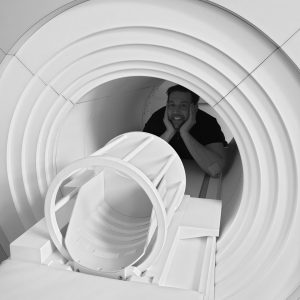 Dr. Guido Camps DVM is a researcher in the Sensory Science and Eating Behavior group at the Division of Human Nutrition at Wageningen University & Research. His research mainly focuses on using the MRI scanner to analyze brain responses and visualize digestion and gastric emptying. His goal is to relate these physical processes to subjective experiences. In simpler terms: he’s looking for the difference between being full and feeling full. He lectures in many courses and coordinates a course on frontiers in nutrition science and a course on quantifying yourself.

Outside of academia, he enjoys beekeeping, extreme baking and running a household filled with kids and animals.

Beer, alcohol, gender and the stomach

It could be that the flavor of beer constitutes a conditioned stimulus associated with alcohol reward. Therefore, it was investigated whether oral exposure to NA-beer with or without alcohol elicits similar brain responses in reward-related areas. Healthy men (n = 21) who were regular beer drinkers were scanned using functional MRI. Participants were exposed to word cues signaling delivery of a 10-mL sip of chilled beer or carbonated water (control) and subsequent sips of non-alcoholic beer with or without alcohol or water (control). This suggests that in regular consumers, beer flavor rather than the presence of alcohol is the main driver of the consumption experience.

CO2 in beverages can increase gastric volume, inducing a feeling of gastric discomfort (bloating). Women are more susceptible to this. This study sought to determine the subjective, gastric and neural correlates of bloating in men and women. 34 healthy normal-weight adults (17 women) participated in a randomized crossover study with 2 treatments: ingestion of 500 mL beer or soda over 20 min. Before and after consumption gastric content and brain activity were measured with MRI.
Changes in ratings did not differ between treatments or genders, except for an increase in nausea for women in the beer condition. Women had greater liquid volumes than men. TGV correlated positively with nausea and bloating but not fullness AUC. In conclusion, there are marked differences between the sexes in discomfort, gastric fluid retention and neural activation after consumption of carbonated drinks.