Moderate beer consumption does not increase the risk of stroke 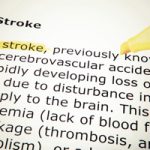 Moderate alcohol consumption, including beer, is not associated with an increased risk of subarachnoid hemorrhage. This was published in the scientific journal Biomedical Reports.