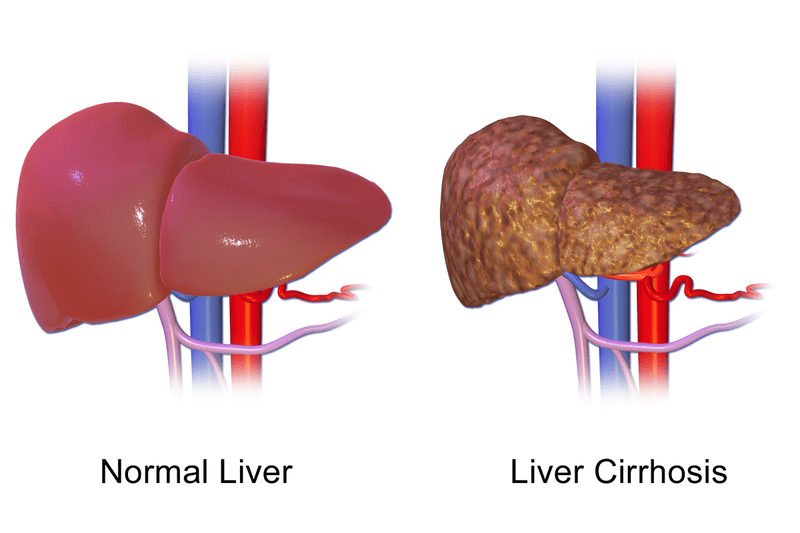 What does this study add?  This meta-analysis is an update of the knowledge, but only includes studies with a sufficient number of cases and adjustments. Additionally, it looks at the alcohol effect on all types of liver cirrhosis; not only alcoholic liver cirrhosis.

Higher risk for women
According to the analysis, there was no increased risk for occasional drinkers to develop liver cirrhosis due to alcohol consumption. However, with daily drinking the risk is consistently higher for women compared to men. For women, even consuming one drink a day (12 grams of alcohol) is associated with a 64% higher risk compared to lifetime abstainers. This risk increases extremely fast when more alcohol is consumed; more than 4 fold (+ 300%) for 2 drinks a day; more than 12 fold for 5 to 6 drinks a day; and even more than 24 fold with more than 7 drinks a day.

For men, the risk did not significantly increase with moderate alcohol consumption. However, with 5 to 6 drinks the risk is almost 4 fold (+ 300%), although insignificant. More than 7 drinks a day, increases the risk 7 fold.

That the risk due to alcohol consumption is more pronounced for women compared to men, is consistent with the findings of the previous meta-analysis.3 However, the increase in risk is much stronger in this new meta-analysis. The previous analysis only found a significant effect with two to three drinks a day for women compared to lifetime abstainers, and even found a protective effect for men drinking one to two drinks a day. Heterogeneity across studies indicated an additional impact of other risk factors.

With this meta-analysis, only two of the nine studies that are included, looked at these two groups separately. Within the two studies, the proportion of former drinkers among current abstainers was 23%. These former drinkers had a 2.5-fold higher risk to develop liver cirrhosis in comparison to long-term abstainers. The authors used these data to correct the risk estimates for the other seven studies, which is the best possible option due to the lack of information, but also raises the question how to interpret the results.

Liver diseases
There are several forms of liver disease, ranging from the relatively mild and reversible fatty liver, to alcoholic fibrosis and sclerosis of the liver, and further to severe and irreversible stages such as alcoholic liver cirrhosis. With liver cirrhosis, the normal structure of the liver is destroyed and scar tissue has developed which impairs the normal function.

Not only alcohol consumption can increase the risk to develop liver disease. It is increasingly recognized that it is a multifactorial disease process. Some confounders are likely to influence the effect of alcohol, for example genetic vulnerability, diabetes, and BMI.