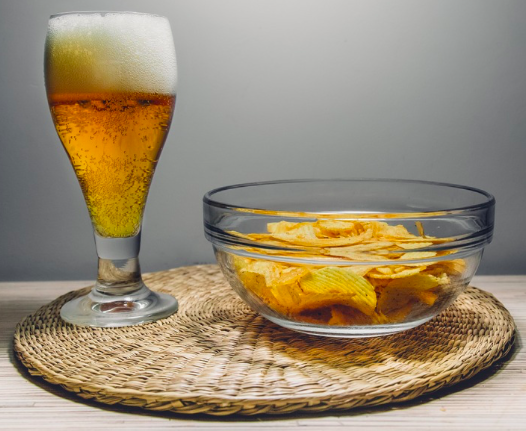 Does alcohol consumption make you eat more? And is there a difference is dose-response? A recent systematic review and meta-analysis1, published in the British Journal of Nutrition, tried to find answers to these questions. The results suggest that even relatively modest alcohol consumption may lead to an increase in food consumption.

What is already known? After fat, alcohol is the most energy-dense macronutrient, accounting for 7.1 kcal per gram. Studies found energy intake from alcohol is often not compensated for by eating less, thus increases total energy intake.

What does this study add? No extensive systematic review with meta-analysis has previously been conducted to investigate the effects of alcohol consumption on both food energy intake and total energy intake.

The researchers from Monash University, Australia, included 22 crossover and randomized controlled trials in which the energy intake with and without alcoholic beverages is compared. In total, 706 participants were included.

Increased energy intake
Many of the included studies only had a limited number of participant and results varied quite a bit. However, when combining the data it seems alcoholic beverages result in a higher food intake of around 80 kcal: about the same amount of energy as one slice of whole grain bread2. Interestingly, a low alcohol dose (<3 alcoholic consumptions) resulted in a higher energy food intake (93 kcal) than a high alcohol dose (≥3 alcoholic consumptions), which showed a non-significant increase of 59 kcal.

The total energy intake (thus including the calories of the alcoholic drink itself) was more profound, with an average increase of 256 kcal. For low alcohol consumption this was an increase of 181 kcal and for a high alcohol dose 294 kcal. It is evident that participants did not reduce their food energy intake to compensate for the energy they consumed through the alcoholic beverage.

Possible mechanism
The mechanisms behind the increased food intake due to alcohol consumption are probably related to alcohol’s effect on several neurotransmitters. For example, in low to moderate doses, alcohol binds to the so called GABAAreceptors, which are involved in the control of food intake in mice. Alcohol consumption also increases opioid peptides, which are claimed to improve the sensory rewards of foods in the mouth. Another possible explanation is that alcohol decreases the serotonin response, a hunger suppressor.