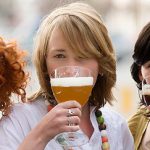 A recent cohort study concluded that moderate alcohol consumption – including beer consumption – decreases cardiovascular and ischaemic heart mortality in women. This was published in the scientific journal BMJ open.

Decreased mortality
In this research1 the alcohol consumption and the health of 48.249 Swedish women was followed for 12 years. The researchers observe a decreased cardiovascular and ischaemic heart mortality in women who consume alcohol. The decreased mortality is also observed in women who drink less than 5 gram alcohol per day as in women that drink more than 5 gram alcohol per day. Alcohol abstainers and women who stopped drinking have a higher overall mortality. The present study did not find a J-shaped dose-response relationship between alcohol and all-cause mortality. This is in contrast with two meta-analyses 2-3. The researchers admit that their main limitation was that they did not have information on excessive alcohol consumption, which might explain why they did not find the J-shaped curve.

Unique
It is not the first time that researchers observed a protective effect of moderate alcohol consumption on cardiovascular and ischaemic heart disease: many scientific studies support these findings4-5. Unique to this study is that the protective effect is examined in young women (30-49 year). This had not been sufficiently described earlier.

Cohort
The findings of this study are part of a larger project: the prospective Swedish Women’s Lifestyle and Health cohort. A cohort study is an observational study in which groups of people having one or more similar characteristics are followed over time. Cohort studies provide insight in the etiology and progression of diseases.