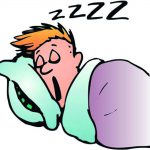 Alcohol is suggested to increase the risk of sleep apnea. A new meta-analysis now combines data from randomized controlled trials to further investigate this proposed association. Results show that alcohol is related to several breathing parameters related to sleep apnea. The meta-analysis was recently published in the scientific journal Sleep Medicine Reviews.

What is already known? Previously, we wrote about another meta-analysis of observational studies that suggests an association between alcohol consumption and the risk of sleep apnea. But severe limitations urge for more research.

Impaired breathing parameters
The current meta-analysis1includes 14 randomized controlled crossover trials with a total of 422 subjects. The impact of alcohol consumption (vs. placebo) on breathing measures during sleep was investigated. Breathing measures included the apnea-hypopnea index (AHI) and mean oxyhemoglobin saturation (SpO2). Results shows that alcohol intake increased the AHI and decreased SpO2, both indicating impaired sleep-related breathing parameters. The increase in AHI was mainly seen in people with obstructive sleep apnea and those with a history of snoring. This suggests that these groups are more vulnerable to the impact of alcohol consumption.

Alcohol amounts
The majority of studies used 2-3 alcoholic drinks of 14g per night in the intervention. Three studies used various amounts of alcohol and found that higher doses of alcohol may result in an increased severity of sleep disordered breathing, especially in snorers1.

Other evidence
Another recently published meta-analysis of observational studies investigated the association between alcohol, tobacco and caffeine, and sleep apnea. Results show that those who consume alcohol are 1.33 times more likely to develop obstructive sleep apnea2. These two recent meta-analysis, together with the one we wrote about earlier3, further strengthen the evidence on the association between alcohol consumption and sleep apnea.