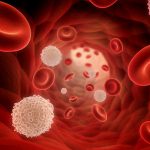 A new meta-analysis looks at the association between alcohol consumption and different types of hematological malignancies (blood cancers). A significant protective effect was found for non-Hodgkin lymphoma. This association was specifically found when consuming beer. The results of this study were recently published in the scientific journal International Journal of Cancer.

What is already known? Alcohol is a known risk factor for several types of cancer. Hematological malignancies are known to be affected by lifestyle factors and diet such as smoking, physical activity, and BMI. Alcohol has been suggested to have a protective effect on non-Hodgkin lymphoma.

What does this study add? This systematic review and meta-analysis1 looks at the association between alcohol consumption and different types of hematological malignancies. Only observational studies are included and the underlying mechanism is not investigated.

Non-Hodgkin lymphoma
The researchers1 identified 14 studies which included 5 million people in total. For NHL 10 studies, with over 11,000 cases, were included for an overall meta-analysis and found a 11% reduced risk of NHL for people consuming alcohol. Further analyses show that the risk becomes lower with increasing intakes. Light drinkers (<12.5g/day) have a 7% decreased risk, while moderate drinkers (12.5-50g/day) and heavy drinkers (>50g/day) have a decreased risk of 15% and 27%, respectively. When the researchers looked at the dose-response curve, they found a maximum protective effect at an intake of 90 g per day. The results confirm the findings of a previous meta-analysis4. Moreover, a large study including patients with alcohol use disorders suggested a similar effect5.
The researchers also performed some sub-analyses. The association between alcohol consumption and NHL seemed stronger for men compared to women. Additionally, 5 studies were used to look at different beverages. The results showed a 12% reduced risk of NHL for beer, while wine and liquor showed no significant association.
For leukaemia and HL no association was found with alcohol consumption.

Mechanism
The researchers described some molecular pathways which could explain the association between NHL and alcohol consumption. Chronic ethanol exposure could be involved in reduced activation of the so-called ‘mammalian target of rapamycin’ (mTOR) complex. Over-activation of this complex is related to development of cancer. Alcohol exposure could reduce the activation and induce self-destruction of tumor cells.
Another mechanism mentioned by the researchers is the protective effect of alcohol on the risk of diabetes. The increased insulin sensitivity and anti-inflammatory effect could indirectly protect against lymphoma risk.
Considering beer specifically, the high content of B vitamins and antioxidants could have a positive effect on lymphoma risk.

Limitations of this study
• Differences between studies in adjustment for confounders.
• Not enough studies to conduct all subgroup analyses.
• Only one database (PubMed) used for searching studies.
• Limited data for HL and Leukemias.