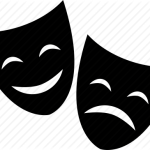 Alcohol consumption often happens in social contexts. A new study reviews the effect of alcohol on the facial expression of emotions in social drinkers. The results, published in the scientific journal Psychology Research and Behavior Management, show that the extent of social interaction appears to be an important factor.

What is already known? Alcohol is strongly linked to social events and social interaction. Previous studies have indicated that alcohol can affect emotions. Depending on the social context, this can be both positive and negative.

What does this study add? This study is the first to systematically review the effect of alcohol on facial expression of emotions in social drinkers.

Effect of alcohol
Alcohol consumption can affect both emotional state and the (facial) expression of emotions. For example, alcohol intake increases pleasurable moods and euphoria but also self-reported anger. Meanwhile alcohol decreases self-reported stress and anxiety, and it attenuates the startle response to unpleasant stimuli.
Regarding the expression of emotions, alcohol is known to deteriorate motor abilities, which could influence the actual expression of emotions.
Moreover, alcohol might increase nonverbal behaviour by counteracting the inhibitory effect of social rules or reducing the perceived necessity to comply with them1.