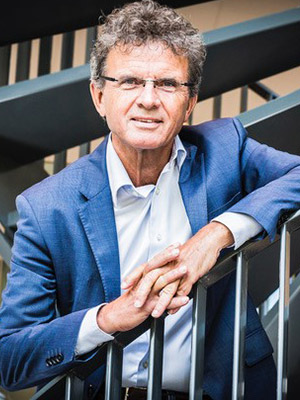 Emeritus professor in Nutrition & Health and former director of the Division of Human Nutrition at Wageningen University, The Netherlands. Kok was trained in human nutrition (MSc, PhD) in Wageningenand epidemiology (MSc) at Harvard University, Boston USA. Kok’s scientific research covers topics such as diet in disease prevention, dietary behavior, and overweight. In emerging economies in Asia and Africa attention is on diet anddeficiency disorders.

He is author of 350 scientific publications, and was promoter of 69 PhD graduates. Frans Kok is editor of three nutrition textbooks. From 2006-2010 he acted as dean of science of Wageningen University being responsible for the quality of academic researchand postdoctoral training.

He has been member of the Academic Board of Wageningen University for more than 10 years. Kok is member of several (inter)national scientific committees. He chaired the Dutch National Health Council committee responsible for the2006 Dietary Guidelines for theNetherlands. Since 2009 Frans Kok is chairman of the board of the Dutch Beer Knowledge Institute.

Kok presents and lectures on nutrition and health topics at many (popular)scientific (inter)national symposia, master classes, and the media.